Best Books of 2018, Feel Free, Go Went Gone, Heads of the Colored People, I Am I Am I Am, Jenny Erpenbeck, Maggie O'Farrell, Nafissa Thompson-Spires, Paulette Jiles, R.O. Kwon, Rebecca Makkai, Scott McLanahan, Speak No Evil, The Great Believers, The Incendiaries, The News of the World, The Sarah Book, There There, Tommy Orange, Uzodinma Iweala, Zadie Smith

I look forward to this list every year, the chance to look back on the accomplishment of a year well read, revisiting books I enjoyed and even some I didn’t like at all. This year more than any in memory, books were a shelter: I read the day we said goodbye to our dog Maude, the day we learned our offer on a cute little house in a cute little town fell through, the day I discovered I would be making a career change in 2019. Without the escape of books I may have wallowed; instead, I escaped for a few hours (or days) and kept moving forward. There were happy reading times as well: I raced through There There by Tommy Orange on the porch at camp and Winter by Ali Smith on the coldest day of the year, snuggled with my Fennie. R.O. Kwon’s The Incendiaries is one I crowed about all year long, The Lightkeepers by Abby Geni was so good I read the rest of her books in the span of about five weeks, and I pondered the ending of Lisa Halliday’s Asymmetry for days, even rereading it a few times for new perspective. There were countless impressive debuts (The Parking Lot Attendant by Nafkote Tamirat, If You Leave Me by Crystal Hana Kim, Everything Here is Beautiful by Mira T. Lee), an exciting number of standout story collections (Back Talk by Danielle Lazarin, Friday Black by Nana Kwame Adjei-Brenyah, You Think It, I’ll Say It by Curtis Sittenfeld), and several new books by favorite authors (Warlight by Michael Ondaatje, Awayland by Ramona Ausubel, Fox 8 by George Saunders). I am surprised to see I attempted so few nonfiction books (14) and proud how many books I read by women (68). I read 106 books total, and for the first time in many years, did not agonize over my choices for this list. I loved what I loved, fiercely, and want everyone else to read and love them, too. Here they are, not necessarily ranked… though I have to say that The Incendiaries and Go, Went, Gone by Jenny Erpenbeck are in a tier of their own and I will count them as favorites forever. Here’s to happy reading in 2019!

The Incendiaries by R.O. Kwon

Without a question, The Incendiaries is my favorite book of the year. I had this mental image of Ms. Kwon choosing words with tweezers and placing them just so until each sentence was perfect. The build of the story was even, controlled even as fraught details are uncovered, the narrative shift between characters executed so well. As I wrote in February: “The genius here is the author’s ability to pull you in, then push you all the way out to be an observer, or vice versa. I sympathized with Phoebe until it was time to see her from a distance, which was clever. I took notes about Will until it was time to see through his eyes, and I could.” I am planning to reread soon and I hope you will add it to your list if you haven’t read already. My heartiest, most emphatic recommendation!

It is a fluke that I picked up this book and thank goodness I did. This tidy novel is about a retiring professor of classics who becomes compassionately involved with a group of African refugees in Berlin. The subject is timely, as our national news tells cleansed and yet horrifying stories about border walls, migrant caravans, detention camps for children, and travel bans. The beauty of Go, Went, Gone is how easily Richard, the main character, offers simple advice or assistance that meaningfully helps strangers in need. He listens to their stories, offers information about getting to appointments around the city, shares books and music, advocates on the men’s behalf with local officials. From my notes: “And yet, as we learn from Richard’s past, he is by no means a perfect figure. He is not romanticized. The language and tone of the novel, with interspersed segments from classic literature and music, remains calm and reflective while the actions of and against the asylum seekers become increasingly chaotic and troubling. As emotional and fraught as the over-arching theme was, I found Ms. Erpenbeck’s approach honest, empathetic, and frank in a way I haven’t encountered before.”

Heads of the Colored People by Nafissa Thompson-Spires

My favorite story collection this year is Heads of the Colored People. The stories felt so fresh and modern, with unexpected twists and distinct characters that refuse the stereotype of a single, shared “Black experience”. The characters are relatable though not always likable, sometimes funny, sometimes sad. The title story was a favorite and I will be very excited to see Ms. Thompson-Spires future work.

There There by Tommy Orange

I try to avoid reviews and previews of books I plan to read and the buzz about There There was hard to miss. It was the novel of the hour, a depiction of an “off-reservation, urban Native American experience” like nothing previously written. Early on I was lost in the book, struggling to keep all the characters and their relationship to one another straight. All at once the intricacies made sense and I was able to lose myself in the story, which was as seamless as it was frenetic… and I could see immediately why everyone is so excited about Tommy Orange, his brilliant novel, and all the potential there is for future stories from him. Once again, as in Heads of the Colored People, we are seeing an author prove how limiting and limited it is to stick to literary stereotypes, instead showing us there is nothing cookie-cutter about these twelve characters– not emotions, intentions, histories, or pain.

The Sarah Book by Scott McLanahan

I still don’t know if this is a novel or nonfiction, and I don’t think it much matters. I admire Mr. McLanahan his ability to blur that line and create a book so emotional that I laughed on one page, was furious two pages later, and cried just after that. The Sarah Book is the story of a failing relationship, from the perspective of a husband desperately in love who sees that his wife is unhappy but can’t comprehend why or what to do about it. He writes love letters and makes awkward attempts at sweet gestures… but mostly he is swept along by her and seems to always be wrong, or behind, or misguided. There is a dog, Mr. King, and you will cry about Mr. King. I wanted to read this because of the title; I lucked in to a heart-rending story. 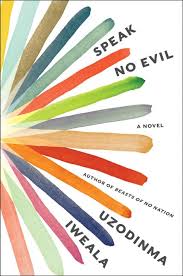 Speak No Evil by Uzodinma Iweala

A slim novel I saw few others mention this year though I absolutely adored it– Speak No Evil is the story of a young man working diligently to follow his own passions while respecting his upbringing and the wishes of his parents. There is so much tension in this story, heartbreak and inner turmoil while Niru and his father, especially, try to “keep up appearances”. The ending is absolutely shocking and I still think of it all the time. I hope more readers find time for this book.

The Great Believers by Rebecca Makkai

Perhaps the most epic of all the novels I read in 2018, The Great Believers tackles the enormity of the AIDs crisis in 1980’s Chicago. I was stubborn about this one, not wanting to read a thick “sad story” and have my heart broken, but once I got over myself I found so much to love here. First there is Yale: a good friend, a loyal companion, a conscientious employee, a lover of art. Seemingly in the center of a whirlwind of death and disease, he stays steady and true. My favorite part of the novel is Yale’s conversations with Nora about art and her time in pre-war Paris. I also very much enjoyed the current-day story of Fiona, the sister of Yale’s friend Nico, as she looks for her daughter in Paris. Though I usually don’t care for time jumps, the writing was so skilled, the narratives intertwined expertly. Thank goodness I made time for Ms. Makkai’s beautiful novel; I am richer for the experience.

Called a memoir but unlike any other memoir I’ve ever read, I was astonished by this book. I am familiar with Ms. O’Farrell’s novels and some part of me thought this was a novel when I started reading. It is unsettling and fascinating, a compilation of vignettes describing incidents or instances when the author might have died. As I read I reflected on my own life; I thought about reactions to stress and danger in a new way. As I said in April, writing notes about I Am, I Am, I Am: “I found myself scanning my own past to frame things as Ms. O’Farrell does… not intending to one-up the author, just to wonder if I could relate. And though my life hasn’t been nearly as exciting (harrowing?) I find that I can absolutely relate, and sympathize, and grow and learn from having read her words.”

A sublime treat, to have this giant, varied collection of essays from one of the world’s best authors. Though I didn’t realize at the time how much I enjoyed it, I found myself thinking all year about her words: on libraries and the importance of free public spaces, on privacy and social media, on literature, music, family, and climate change. She is wise, funny, honest, precise, and biting at times. I have so much respect for Ms. Smith’s opinions; hers is a brilliant mind.

The News of the World by Paulette Jiles

Not a new book, but one that bowled me over with its earnest grace. “Kep-dun” and “Cho-henna” will forever be two of my favorite literary characters, and the story of their relationship and building trust is one I will recommend frequently.